WHO IS THIS MAN?

Mikhl Yashinsky (מיכל יאַשינסקי, aka Michael Yashinsky) is an actor, playwright, stage director, and Yiddishist. Currently appearing in the tradtionally drag title role of Avrom Goldfaden’s operetta The Sorceress at the National Yiddish Theatre Folksbiene and, afterwards, returning to his dual roles as Morkdhe the innkeeper and Nokhem the beggar in the Yiddish-language production of Fiddler on the Roof directed by Joel Grey. Formerly taught Yiddish language and culture at the University of Michigan. Before that, served as education specialist and the Applebaum Fellow at the Yiddish Book Center in Amherst, MA, where he collaborated on the writing of a new multimedia Yiddish textbook, forthcoming; directed operas at Michigan Opera Theatre; worked as a teacher of Spanish, Yiddish, and drama at Frankel Jewish Academy; wrote plays that happily made their way to full production, and took a number of acting roles off-Broadway and in regional theatre. Trained in foreign languages and literatures, directing and playwriting, history.  Wandering peddler of his own songs and stories, poems and plays. 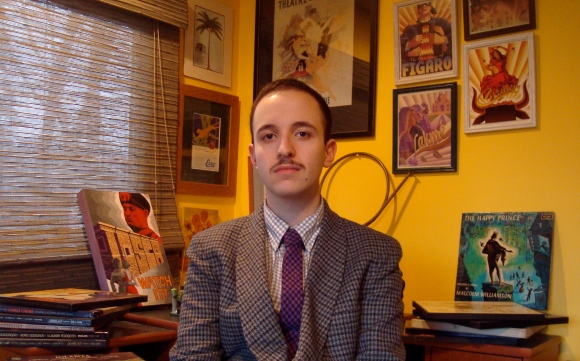 In his yellow bedroom.

Born in Détroit, Michigan, where it’s south to Canada and “up north” to a summer wonderland of dancing whitefish and prancing white-tails (deer, Yashinsky’s most favored animal—see Felix Salten’s Bambi, an inspiration, not just to Walt Disney).  The grandson of actors, Elizabeth Elkin Weiss and Rubin Weiss—pioneers of radio and television, and revered treaders of the boards in their and Yashinsky’s native metropolis.

As an undergraduate at Harvard, took internships at the Detroit Opera House and Vienna’s Theater an der Wien, returning to school every year to perform in and direct plays, operas, operettas, for such ensembles as the Lowell House Opera, oldest opera company in New England.  For one role with the Harvard-Radcliffe Gilbert and Sullivan Players, as the fatherly old bass-baritone in The Sorcerer, wore bright yellow tights.  Hung them on his dorm room wall through the following year as a testament to the vividness of live theatre.

Wrote Hoopes Prize-winning thesis, Churning Hearts: The British Milkmaid in the Nineteenth Century,  which he researched the prior summer in rural archives throughout England thanks to a grant from Harvard’s Center for European Studies.  Graduated with highest honors in the History and Literature of Modern Europe, with a secondary degree in Government and a language citation in German.

Spent the year after college in a quaint 19th-century lifestyle such as his milkmaids might have admired—receiving a room in a Cambridge B&B for his work as innkeeper’s assistant (cooking breakfasts, welcoming the guests of diverse lands in tongues many and various), and researching the history of monarchy and social welfare under a warm and wise professor of government.

Eventually returned to his native peninsula, where he spent three years directing and assistant directing operas, leading programs of operatic community engagement, and writing articles on productions at the historic Detroit Opera House, formerly a 1920s movie palace. Highlights were a production of Malcolm Williamson’s The Happy Prince, shifting the action of Wilde’s fairy tale to the streets of Detroit; and a production of Brundibár, the children’s opera once performed by the inmates of the Nazi concentration camp Theresienstadt. Appearing in Yashinsky’s staging at the Detroit Opera House was Ela Stein Weissberger, the survivor who had played the Cat in the camp.

At the Yiddish Book Center, Yashinsky is currently taking part in the writing of a new Yiddish textbook, and has contributed to curation projects, researching, translating, and writing about Yiddish-speaking authors and housewives and goats and ghosts; administrated a program for the translation of Yiddish literature; taught students of all ages; conducted oral history interviews in Yiddish; created educational kits aiding instruction on modern Jewish literature and culture in high school classrooms.  The first month of his Fellowship found Yashinsky reciting translations of Emily Dickinson’s poetry into Yiddish at a festival taking place in the lifelong home of the poetess; in Montreal, launching Pack Light, a line of tote bags honoring and advancing the causes of Jewish change-makers; and in Mexico City, undertaking the rescue of 10,000 Yiddish books.

For videos of some of Yashinsky’s artistic exploits (though mostly from old college days), visit youtube.com/framboiseyebwaz.