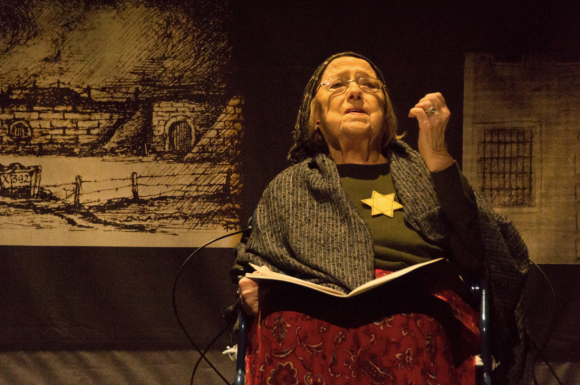 Roast Owl with Capers: A Rustic and Domestic Play in Verse

Mysterious drama centered around a transforming painting and the solitary young man who owns it, performed in the dining room of President Benjamin Harrison’s mansion

Dramatic piece drawing on poems by child internees of Theresienstadt concentration camp, performed as a curtain-raiser before production of Brundibár that Yashinsky directed, featuring Ela Stein Weissberger, Shoah survivor and the Cat in Theresienstadt’s Brundibár

In the back parlor of President Benjamin Harrison’s mansion, The Candlelight Theatre performed this Victorian era-set comedic drama that Yashinsky wrote under their commission

Declaimed as a prologue to S. Dayksel’s fantastical drama Nokh tsvelf baynakht [After midnight], which Yashinsky directed; intended for an added character, “Der gayst fun der levone” [The spirit of the moon]

Co-lyricist of this international organization’s anthem, recorded by the North German Philharmonic Orchestra and Chorus

Revealing the life and works of Detroit’s dean of Yiddish letters, including discoveries of his private library and other artifacts related to him, as well as translations of Korman’s poems, the first time they have appeared in English; expanded with new research from the article previously published on the Yiddish Book Center’s website (see below, “The Signs and Symbols of Ezra Korman”)

Translation of a speech delivered by Yiddish poet Rokhl Korn at Montreal’s Jewish Public Library in November 1977, on the birth of the poetic impulse in her and other Jewish writers

“Feasting is the Finest Prayer: Dreams of the Holy Land In the Pans of Ashkenaz,” July 2017—Proceedings of the Oxford Symposium on Food and Cookery, 2017 (London: Prospect Books, 2018)

—At this leading culinary history conference, presented a paper on Eastern European-Jewish imaginings and importations of food from pre-State Israel, drawing on Yiddish-language recipes, travelogues, and reminiscences of the period
—Later published in the Symposium’s Proceedings, including the best papers from that year’s conference

“The Nutcracker: Leaping Away From, and Toward, Holiday Tradition, with Victoria Morgan,” November 2017—Detroit Free Press; Detroit News

An interview with the choreographer and artistic director of the Cincinnati Ballet, in anticipation of the company’s performance at the Detroit Opera House

“Some Like it Rethought: The Artistic Integrity of a Mob Rigoletto,” October 2017—Detroit Free Press; Detroit News

On the creative conception of an English National Opera production of Verdi’s Rigoletto, re-mounted by Michigan Opera Theatre

On the life and afterlife of a little-known writer

A culinary journey into a mysterious bag of archival recipes from 1950s Yiddish newspapers, found in a corner of the Yiddish Book Center

Findings on the rare paintings of Yiddish poet Celia Dropkin, who in her latter years replaced her pen with a paintbrush

“Di goldene kale and Fiddler on the Roof, From Broadway To Battery Park,” December 2015—In Geveb

“Unfading Voices: The Many Languages of The Passenger,” November 2015—The Metropolitan

Article in advance of Michigan Opera Theatre production of Elektra; article focused on the enduring appeal of Elektra and the particularities of her character, as derived from interviews I conducted with three Motor City residents—a forensic psychiatrist, a classics professor, and a young woman named Elektra

Accompanied by a podcast produced and narrated by Yashinsky.

“Turandot Plays Hard To Get,” May 2014—The Metropolitan Detroit

Another version can be found on p. 28 of Michigan Opera Theatre’s magazine, BRAVO (Spring 2014)

Poem, a feminist imagining of a story from the Biblical Judges, published in Harvard’s Jewish literary journal

“Confessions of a Teenage Mascot: My Life as a Bee”—The Best Teen Writing of 2007 (Scholastic)

“Sparks of Eternity: Kerem b’Yavneh” [A vineyard in Yavneh], Spring 2015

Dialogue writer and story editor for these adventure computer games designed to educate about Talmudic teachings and the Jewish calendar, “Breakthrough” set during the Roman siege of Jerusalem, and its sequel “Kerem b’Yavneh” set in the agricultural community of Yavneh in ancient Israel, the center of Jewish learning and practice in the days following the destruction of the Second Temple

Both available for free on the iTunes App Store and at jewishgaming.com